Thanks for feedback, inputs and corrections to Prof. Bert Obernosterer and Coach Markus Miedel! 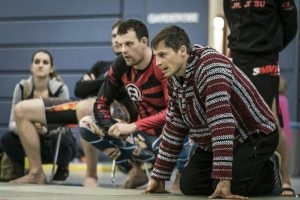 Not only our school and students have to improve but also us as an instructors and as a Coach or Professor. When I think of improving my school I start thinking at the same time how can I improve as a person. When you are responsible for the preparation and progression of your students you have to work on yourself all the time. At a tournament I take it personally when my students lose because of a technical error. Something inside me is crying seeing my students lose because I did not teach them the right technique or did not address the right situation and I start right after the loss to think about what went wrong in the preparation to this point. What can we do in the next few training sessions to eliminate this problem and be ready for the next tournament?

Everyone who has trained Brazilian Jiu Jitsu has heard about the comparison between BJJ and chess. They are definitely not the same but have some similarities. Being not only an athlete of BJJ but also a Coach of a BJJ team has shown me that coaching is the real human chess. You are the one who is telling your student what to do and helping him on this way getting closer to the win. Good coaching can really help during a BJJ-fight.

Last weekend I had the opportunity to coach some of my guys at a local tournament. When you start realizing that coaching can be an extra tool to influence the fight in your direction you also notice that coaching is a big responsibility and there are a couple of things to avoid. 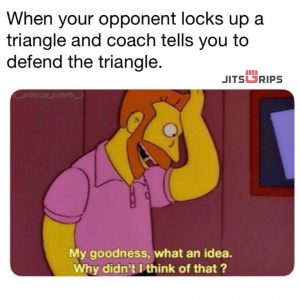 Listening to other coaches and fighters it is easy to find out what not to say.

“Escape the position”, “do something”, “go hard”, “you know what to do”… is something you hear very often. But this does not really help your student. Being stuck in a triangle I am sure he knows that he should escape the position.

What can really change the fight are short and precise instructions. For the most fighters 3 calls are very helpful!

USE SHORT and POSTIVE CALLS

If you have a student who is new to competition these 3 calls are most important. But if the fighter is more advanced and you know his game well then you can tell him much more. A more experienced fighter is going to listen more to you because he is calmer in his head than a beginner. Remember yourself when you stepped on the competition mat for the first time, you have not even heard anything because you were so nervous and full of adrenaline.

Having more experienced fighters means you spend more time with them on and of the mat. They trust you and they are also used to your voice. They can definitely use a second brain in their corner who observes the fight from the outside.

As a Coach you should be a help for your fighter. This means any behavior that adds extra stress to the athlete has to be avoided.

The instructor is responsible to prepare his students according to the rule set of the tournament. If you do not know the rules how can you find the right strategy? On every tournament I have been so far, I saw coaches shouting with the referee because they did not know the rules.

What we do is called BJJ. Not MMA, not Judo, not wrestling and we have specific rule sets according to the event (IBJJF/ADCC/EBI) and it is the coaches’ homework to prepare the students according to the rule set. Which techniques are legal, which are forbidden? How could I get disqualified? I respect all referees who have to deal with angry coaches who do not know the rules! If BJJ is not your main sport, please do not believe that you can do anything which is allowed in our sport in a BJJ event. Again, it is not the referees’ fault when you did not to your job!!!

Good coaches take responsibility when they did something wrong in the preparation of his fighters. But good fighters also take responsibility when they lost because of a mistake they did and do not blame their coach! (For example, they did not work enough for their conditioning and the coach told him already 5 month ago that he has to improve his endurance before anything else). I always tell my students that it is my fault when they could not defend a submission because they did not know the submission at all. What you do not know you cannot defend. Sometimes this can be we very hard too when new athletes compete with a modern BJJ game against your students. But I prefer my students getting a good base first and probably cannot defend a berimbolo at their first tournament but know how to defend basic attacks and escape the basic positions. Of course I take it as my responsibility when they lose too, but on the other side I am responsible for their process as well. And this means basics first!!! It is definitely better to have a hard time competing in the beginning and later it is getting easier. If you only use modern techniques which white belts do not know in the beginning you can win a lot of tournaments in an early stage but later on it is going to be harder because the other beginners improve too. Do not build your game on sand, build it on a solid and strong base.

Do not be too proud about yourself changing your coaching or preparation training for a tournament from time to time. It is all based on the trial-and-error method!

Rethink everything you do and do not take anything carved-out-of-stone.

Standing and coaching from the sideline I really like to hear my opponents Coach too. When I understand his coaching I know already what they are trying to attack. Having a different language or different words for certain situations can be very helpful. The problem is you do not compete abroad all the time. In another country it is easy and the opponent normally does not understand you.

One tactic could be to use a certain terminology which not everyone understands: for example go back and use Judo terminology. Ashi Waza (leg techniques) or Shime Waza (choking technics) can help to use to hide your next coaching calls. I think Judo techniques are great because they are much more precise. In BJJ we are not so precise –for example: Side Control is Kesa Katame, Ushiro Kesa Gatame, 100 Kilo or even Knee on Belly…. In Judo there is a term for every different position and technique and most schools or Professor do not spent the time thinking about a different language and terminology at all they just use the usual terminologies. 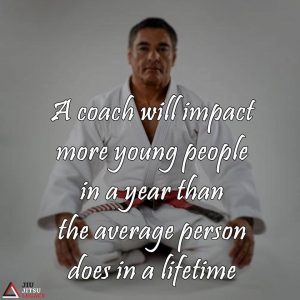 “Go to 69 position” or “put your dick on his face” are in my eyes calls which should be avoided because you make your art down. You want regular people to train with you, you want to improve people’s lives with your art, and this means also you have to use an accurate academic language. The students are always a mirror of the coach and the way he behaves most of the time. When you coach everybody can see and hear you. In BJJ we say you cannot hide yourself, you always express yourself and the same occurs even more when you are coaching and screaming on the sideline where everyone can hear you.

Does the Coach need to compete?

I think a Coach or Professor needs to compete to understand the game, the art, the competition situation and the pressure students are facing in a tournament. But you definitely can be a great Professor or Coach without being a world champion by yourself.

BJJ as I train it for myself is for sport competition. I am not an expert on BJJ for pure Self-defense. There are definitely better instructors out there. I know the basic for Self-defense but my focus is sport BJJ for Gi and NoGi. I also know basic MMA Grappling but I am definitely not an expert on this field either. I can help my students’ lives when I improve their training in BJJ and at the same time I try to work on their personal development as a person. In life we always have to overcome challenges and that’s why sports can help us in many fields. Being now a Professor for a team I need to work much more on myself to improve my school and students. Helping them to win a tournament, looking in their eyes after a hard few month of preparation is really satisfying.

Success as a martial arts teacher is not about producing cool looking moves for YouTube, it is by improving my students’ lives in a positive way (improve their self-esteem, their feeling of security, fitness, health and so on). Success as a business man, running a BJJ school, is when I can have a good quality of live for me and my family and on the competition sport side I am successful when I can produce champions.

Clustertraining for a 10 min BJJ superfight