You are here: Home » Articles » BJJ » Belt Levels in BJJ

Promoting students to a higher belt is a tricky situation. As an instructor you always think about the development of your athlete and how you can help your student to evolve. Giving belts away means a lot not only for the student who is receiving his belt but also for the school or team which they are representing. Which levels do blue belts need to have to get their belt? When is the right time to promote them to purple and finally to brown and one day black belt?

In the old days students needed to test their skills in a competition. Today BJJ is not only there for the tough guys but for everyone and some of them will never compete in a tournament. I still think that competing is something students should at least do once or twice to feel the atmosphere in competitive situations and also to see how you react for yourself under the pressure of a fight outside of your own gym. But only 20% of the students compete, some will never compete in their live. As an instructor you can organize indoor tournaments to take the fear of competing away and to prepare a few more students to compete one day.

But in the end we cannot take a competition victory for the only useful guideline to promote students. What kind of school would you have if only competitors would get promoted??? There are students who are amazing in competition but when you talk to them and explain techniques you feel that they are not ready yet – even if they won some tournaments. For me students need to develop not only their techniques but also their understanding of the art of BJJ as well. Understand why a technique works, I want to see them working on their own strength and weaknesses and to grow their own game. After a certain level I think I cannot be the only one to think about the improvement of my students – they also have to start to think for themselves. Techniques, understanding of the principles, understanding of the body movements and anatomy is part of getting closer to your next level. One day a student with a blue belt asked me why I take the back in turtle position and do not try to reversal him….  – I mean there are no stupid questions but if you understand our art, you need to have a certain understanding of the position hierarchy which a white belt should learn in the beginning.

For a long time I thought about what students need to know to get the next belt. I teach based on a curriculum and after 2 years my students should more or less be ready for their first belt – the blue belt. I like to give yellow, orange and green belts also to adults to keep them motivated and to give them more time if needed. I know that the blue belt should be the first belt for adults but I learned that BJJ was born because we did not follow traditions but developed and changed rules for a reason and this attitude was one of the main key points that BJJ became this amazing art which it is today. If we start following tradition too much because we are afraid to change for example for better motivation for our students than this is legit why to do, it in my eyes.

Belts should show that students are improving. That we have a certain understanding in your team what a student with a certain belt should know already and that you do not have to take too much care about him anymore. But students are different. I cannot expect that a guy with 120kg is able to do the same like a guy with 55kg. So I cannot compare their belts on any level. Even my way of teaching is hopefully changing over the years because I am improving as well. That’s why I moved away from having only a curriculum about techniques which my students need to know to promote them and I started to base my promotion of belts on different values. 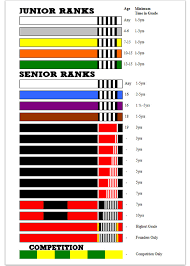 In my eyes a blue belt should have the understanding of the fundamentals of BJJ. This takes around 2 years. But time is only a small piece. Of course the physical condition plays a big part in BJJ as well – even if we always say the opposite. But if you played American football or did gymnastics in the last 5 years and then you switch to BJJ you will be promoted faster than someone who was a “TV warrior” before starting to grapple.

65% stop training when they get their blue belt, because they did not start to set a new goal after their blue belt graduation. For me the purple belt shows if students have the heart to continue. In my eyes a purple belt already starts to filter techniques and to concentrate more on a personal game. Some start doing more footlocks, other start inverting more, other start concentration more on takedowns and the top game and some start to develop a guard which is very hard to pass. In the end they should be able to start developing their own game on the fundamentals they learned before and can now apply on their own anatomy benefits.

Are on the way to master their own game but at the same time they also know where they have their weak spots. In my eyes they already are on very high technical level and there is not a lot of difference to a black belt.

For me a Black Belt is a person who is starting to live BJJ. They are not only thinking about themselves anymore and start to do more for the BJJ community, their school or team. They are role models and persons to look up to, not only on the mat but also off the mat as well.

I do not want to have any black belt one day who is a complete asshole. If someone gets promoted from me I want to have someone who has amazing technique skills but is also an amazing human being and is a black belt in live as well.