BJJ is not BJJ anymore! 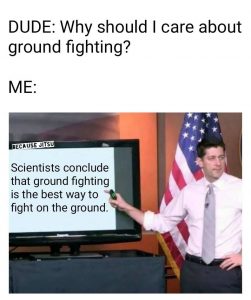 I just saw this picture on facebook and it made me think! In martial arts there was always the question which is the better fighting style and who is the best fighter. Look at the development of the UFC and what the sport is today. Because of this question martial arts were improving, people are not only training in one style anymore if they want to fight at a MMA show. We know that we cannot say which fighting style is the best anymore but we can say which individuals know how to fight best under certain rules.

BJJ is a sport which was part of the success of the UFC. Today we hear a lot about the loss of the original value of our Art of BJJ. People are training not for self-defense anymore but only for the competition and to show that they are good grapplers. Founders of our art always wanted and still want BJJ to be more than a sport, to be an Art for self-defense, for MMA, for fitness and so on. But today we really have to ask ourselves if this question is important anymore. BJJ player who train for competition do not care about self-defense at all. They want to win according to IBJJF, ADCC or submission only rules. They spent hours on the mat to perfect their skills and really spent not one second at all thinking about self-defense. And I think we have to accept this.

Is our Art watering down?? In my eyes NO! It is changing and evolving but the power of our Art is that it is possible to use the techniques in a way to be successful in a sport, in a MMA and on the street. But we have to be honest with the way we train and want to use BJJ!

What I would like to say is: BE HONEST WITH YOURSELF AND THE WAY YOU TRAIN BJJ. BJJ is not BJJ anymore, if you like (for example: IBJJF tournaments) one way better than the other be honest if someone asks you if you can help him at MMA/Self-defense/Submission only. I mean of course you can help him but tell him that you are not an expert at this field because your focus is somewhere else.

Today a lot of schools say that they teach MMA, BJJ, Submission Wrestling and Judo at the same time. Very often even the same teacher! Of course if you want to make money you need to tell what new students want to hear but perhaps you start saying where you focus yourself on before you say you know everything and be good in all fields of our Art!!!

In my school we offer MMA, BJJ and Judo – I teach BJJ, but we also have one guy who only focuses on MMA, one guy who focuses on Judo and when we train together we all can improve from each other but we know that every field needs to be focused on separately. Some people still ask which area is better or is the best!? I talked too much with people about this subject and I am tired about it. The best is the area you want to improve most. The field where you can develop your potential as an athlete and at the same time as a person. If you still need to raise your EGO and tell everybody that your way is the best you never understood the power of our ART which can change in more than one direction.

Here you can see that BJJ today can focus on a lot of fields and rule sets and this changes the way you are training the Art of BJJ. I would say that self-defense and training with the kimono is easier to combine as well as NoGi and Grappling for MMA.

It all started because of the self-defense aspect and this is the part we do not care anymore. It is understandable that the Gracies and founders of BJJ are right when they say we neglect the self defense aspect. I would not say that a lot of people neglect it, the truth is that they do not care about self-defense at all!! (And somehow this is a good sign!) In the development of BJJ, the first way to prove your quality of training  BJJ were Vale Tudo fights. You could really do everything you wanted – no rules!!! If you compare UFC events with Vale Tudo fights it is not the same anymore. There are rules – around 30 -50 rules today – but because of the marketing people still think this is a sport without rules. But as soon as you talk about a sport – you have to take care of your athletes and then it is far away from a self-defense situation. Pride Events where much more brutal than UFC but it does not exist anymore. In Amateur MMA fights elbows and knees are (often) forbidden.

The rules set of the Kimono IBJJF fights was based on the street defense idea. You got points for positions where you could control and punch. The position hierarchy is based on punching in different positions. But BJJ was developed out of Judo and when Judo became an Olympic Sport 1964 they focused only on the throws and because of the rules the ground fighting was not trained anymore. Out of BJJ also Luta Livre developed. I asked one of the highest Luta Livre representatives in Europe what is the difference between BJJ – NoGi and Luta Livre and he said – there is no difference because they developed next to each other at the same area at the same time. In the beginning BJJ was because of the use of the Kimono more influenced out of Judo and Luta Livre was influenced out of Catch as Can Wrestling – but that’s it. And if you take your Gi off, in standing Wrestling gets more important. Put the Gi back on, Judo is more useful. I would say the difference is because of the use of the Kimono or not and nothing else.

And today we have NoGi – for ADCC, for submission only Events, for EBI and for IBJJF NoGi Tournaments.

As soon as a Martial Art changes to become a sport then it starts to change. When you have a different rule set the sport starts to change again. You can become good in more aspects of grappling but you need time for this and it is probably not a good idea to fight one weekend under IBJJF rules and the next for MMA. You have to specialize your training for certain amount of time. But it is amazing what huge variations BJJ can offer today!!!

This brings me to the idea that on our BJJ intensive Camps we have to tell our students for which area of BJJ our classes are. We offering classes for MMA, self-defense, BJJ – Gi – Basics, BJJ – Gi – Advanced, NoGi and Luta Livre, Leglocks (Heelhooks) and woman classes. It is the student’s homework to choose the area they want to improve, but we have specialists for all different aspects of our great ART – Brazilian Jiu Jitsu!!!!

Until now I have never seen any other BJJ Camp where they try to cover all aspects of the ART!

Happiness comes through learning/growth and contribution.

I have been doing much studies, going to seminars and courses the last two years, to understand more about life and why I picked this profession and the true role a teacher must have in the character development of any student adult or child and I would risk to say on the influence we can do in a child’s family.

I truly believe that a martial arts teacher must be very successful and always seek to be the best human being they can possibly be. By training, studying, reading, investing so by his remarks people could be impressed and influence for the good.

A teacher must carry a very strong moral code and hard work ethics in order to make their students the same way and change the society.
I have been to many seminars and Courses, loved Tony Robins did all his courses with the exception of one, that I still will do.

Spent thousands of dollars but It truly changed my life and the way I see it and seek for success. By the way success is the process one has to go through to achieve a worthy goal. But success might not guarantee happiness.

Happiness comes through learning/growth and contribution.

This week I decided to put an old project in action.
I called a friend and scheduled an appointment with a former Judo teacher of mine that is now a city council.
I asked him for giving me the responsibility of being in charge of an elementary school, physical education process. I asked him to allow me to have access and use its facility to teach jiu jitsu/Judo for free for the kids of that community.

I presented my project my goals and dreams and the response was yes.
I will have the facility. We will hire a coach, We will pay his salary, We will buy and the mats and We will giving the proper training and We make it happen. We Sampa Jiu Jitsu.

As of now the coast per month is $250 per coach/per School.
The kids live in a place where monthly family live under $1 dollar a day.
The project is not only to teach jiu jitsu but one day arts, music, dance, teaching kids and their parents skills and jobs. But as of now the only starting tool we have is jiu jitsu.

I am very happy and fulfilled with just the idea of the challenge.
I am sure We can raise funds here in the states and in Brazil to sponsor other coaches and schools.
We will change many families. Brazil will be the first point but I want to grow it to poor areas in Los Angeles, Mexico e South America.

Hopefully this dream will come true.
Thanks for reading it and let me share this moment of extreme happiness.