This article was extracted from: http://fiveouncesofpain.com/2009/10/18/renato-migliaccio-respect-is-everything-in-bjj/

Editor’s Note: Renato Migliaccio, the newest FiveOuncesOfPain.com columnist, is a decorated martial artist, holding black belts in both Judo and Brazilian Jiu-Jitsu (under the late Ryan Gracie). Additionally, Migliaccio also is considered one to the top lightweight MMA prospects not signed to a major organization with a perfect record of 6-0.

In his guest columns that will appear periodically on 5 Oz., Migliaccio will provide his insider’s perspective on martial arts training. In his second submission, Renato talks about the importance in being honorable and staying true to your team and instructor.

The other day, a friend of mine who has studied Kung Fu for many years told me that “Sifu” is not a Chinese word for a teacher but rather has a greater meaning of that of a teacher who is also a father. I believe in the principle of that meaning, as there is no value for anything that anyone teaches you.

People can take a lot away from you but not what you have learned. Most of the times, a BJJ teacher will help you by teaching you a technique; reinforcing that patience is a tool for the progress; and by showing you that losing is part of the game but while at the same time never allowing you to be comfortable with a loss.

An instructor should always motivate you on and off the mat. An good instructor will always be mindful of your safety and always will bring your confidence to the highest point. If this is not the level of instruction you are experiencing, then it means that he or she is not a good example of what being a true black belt is all about.

For me, personally, I don’t need a certificate for someone to prove to me that they are a legitimate black belt if they respect their lineage. However, other people are different. In the times we currently live in, there are those that are so obsessed to get their black belt that they jump from school to school in order to take a quicker and easier path.

Many people abandon their roots and forget their loyalty if they become frustrated with their instructor if they see someone who has not trained as long as them achieve a belt promotion before they do. The mistake that some of them are making is that they sacrifice tradition in order to receive a quick promotion from a school or team with no history or lineage.

And by changing schools or teams frequently, you might be able to take some short cuts and you might find yourself surrounded by many other fellow students. But by not respecting a lineage and having patience, you might find yourself at a school in which you are surrounded by a large group of people that are not your friends. Those who remain loyal and don’t jump from a team at the first sign of frustration will be rewarded in that they will remain with a school or team that has become a second family — a family that will sacrifice themselves for a higher goal: their friend’s success. The jumpers will never know such a feeling of family. And in many cases, those that jump in order to get their black belts quicker has a tendency to leave his or her “master” because the belt itself is all that mattered and they forget about everything that comes with it.

But this is where the big mistake in my previous article. They might find themselves with a black belt but they will also find themselves in a situation where they need to show a certificate to be taken seriously because their belt has no lineage, no school, or team to back it up. Sadly, they not only need a belt but also need a piece of paper.

I am not suggesting you should accept everything your instructor does or say. However, you need to recognize early in your training that a school or instructor might not be right for you and move early in your training so that you are able to find a true home and build the kind of roots that can only grow over the course of time. Waiting until you have reached brown or belt black level to break away is the wrong time to leave. Obviously, there are some exceptions to this rule, but more often than not, you should be loyal to the one who promoted you to black belt.

When people in Brazil get mad because a partner or a student is now training at another school is understandable. Especially when the student that has defected is either not ready for their promotion or is not mature enough to having decided to train at a different school.

For example, usually a lot of purple belt students are not fully mature, so they go to another school and they learn habits at this other school which sometimes are not so welcome in their own school. And right there is usually where a big problem starts that ensues to a breakup. This is where maturing comes in, because a good student will always be able to visit another school and not cause conflict at their regular school or guest school because they are respectful there and know the differences between schools.

In Judo, you can train in another school but it is mandatory that you ask your teacher first. If you teacher does not believe you are ready to train outside the school, you will not receive permission. But this is where ego becomes a problem. There are times when a teacher will not allow you to go to another place just because it can hurt his or her ego. Or, the ego issue falls squarely onto the shoulders of the student. Who, despite being asked permission and having been denied, still takes it upon themselves to visit another school because they do not respect their teachers and feel like they can do whatever they want.

In conclusion, you have to find a good instructor that you believe in. Once you have formed that trust, you must show faith in your instructor even when times are not always good. A good instructor will reciprocate and show faith in you even when times are not good. It is when a team can endure not just success together but failure as well in which a true sense of family is formed. Without the family ties, you will have no sense of belonging and a belt with a history and lineage that will easily become lost.

So find a good school, a good instructor, a good environment, and start to belong to something you believe in. When you achieve all of these, you will find it easy to put trust into the choices your instructor makes for you. Do not doubt or be consumed in negative energy, because this is the first step towards a break up. And in time, things will only manifest and you will begin to feel you do not need your instructor or your school, which will only lead to greater problems.

Clustertraining for a 10 min BJJ superfight

Clustertraining for a 10min BJJ superfight 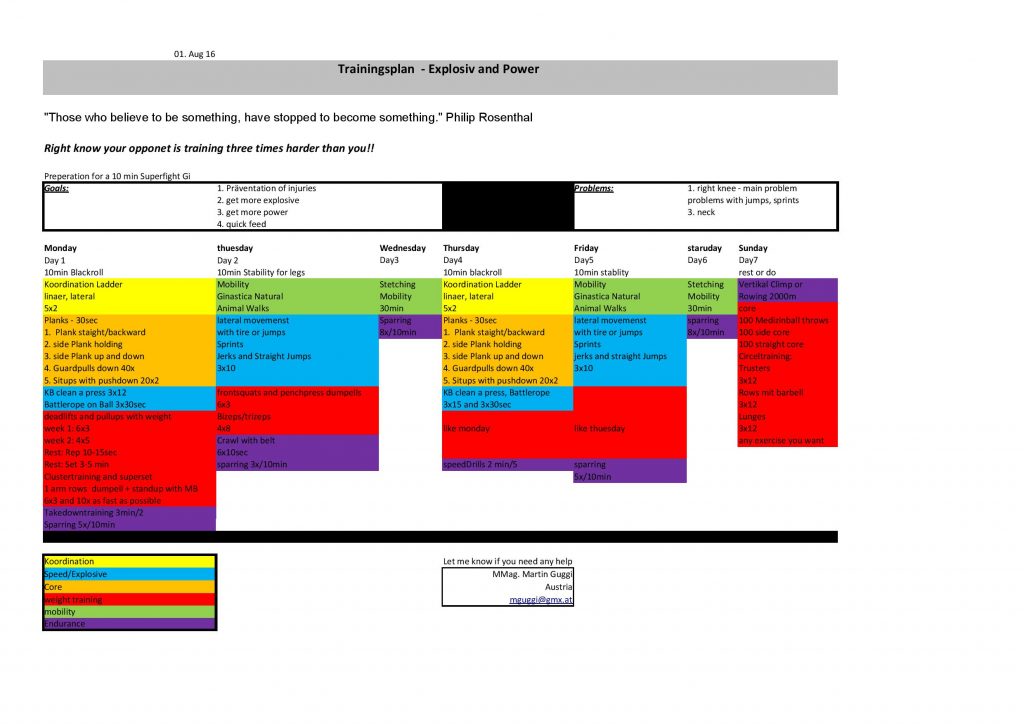 You want to download this trainingsplan? Just klick here ! 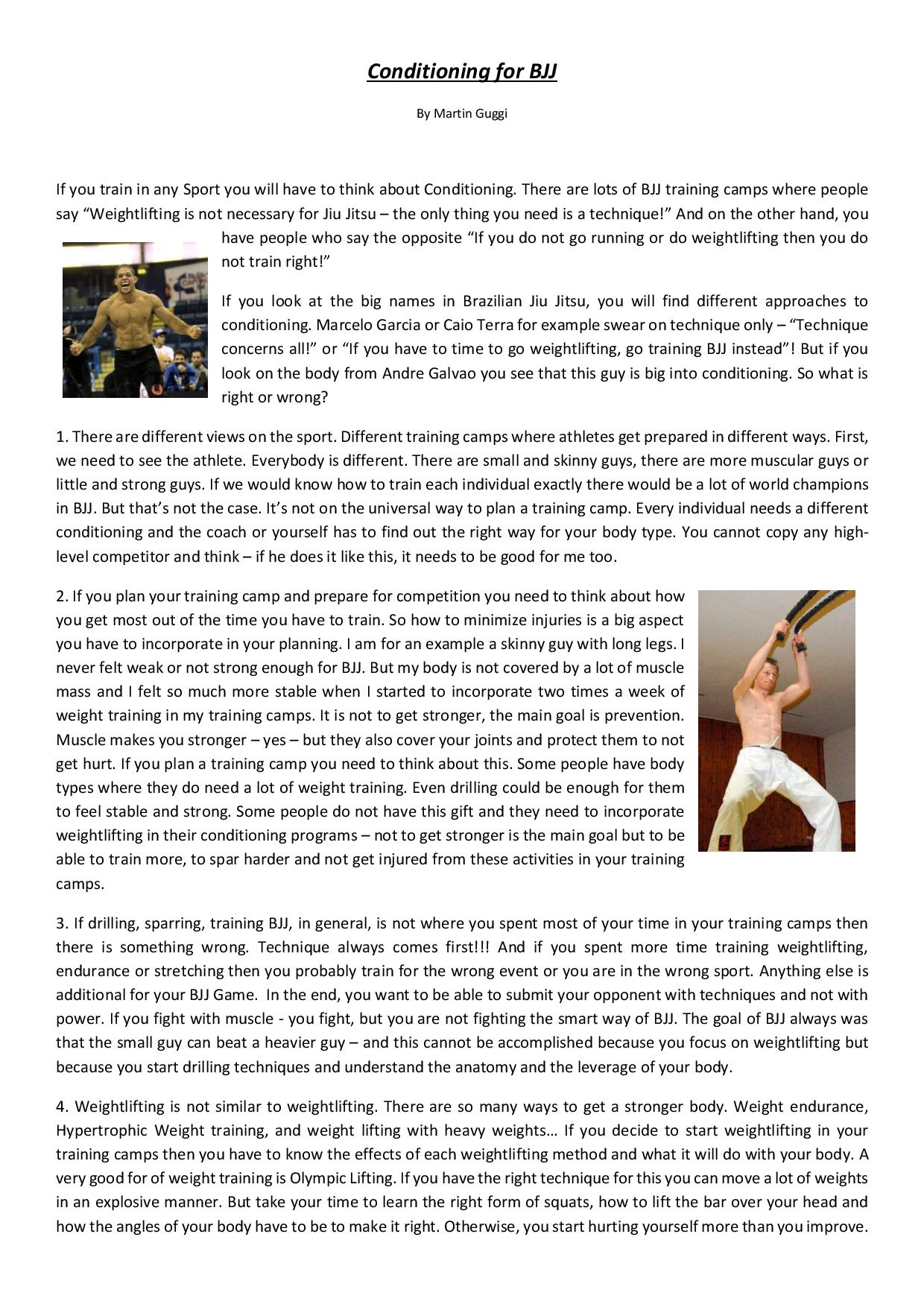 If you train in any Sport you will have to think about Conditioning. There are lots of BJJ training camps where people say “Weightlifting is not necessary for Jiu Jitsu – the only thing you need is a technique!” And on the other hand, you have people who say the opposite “If you do not go running or do weightlifting then you do not train right!”

If you look at the big names in Brazilian Jiu Jitsu, you will find different approaches to conditioning. Marcelo Garcia or Caio Terra for example swear on technique only – “Technique concerns all!” or “If you have to time to go weightlifting, go training BJJ instead”! But if you look on the body from Andre Galvao you see that this guy is big into conditioning. So what is right or wrong?

Create your training camps for your own BJJ needs. Your body is different than any other body and you need individual programs to improve. If you do not focus on your technical improvements you do something wrong. But somebody types need more than just training technique – first, you have to have a body where you can train longer, where you do not get injured and feel stable – for this weight training can be helpful. At the end of the day, the technique will always win – but training camps need to be individual for any personal need.